No Virtual Core Groups in the Second Week of September

Every once in a while, there’s a “bump in the road” as far as the Virtual Core Group schedule is concerned.  Just such a bump will happen during the second week in September.

It’s not really a bump, though.  It’s the 2013 National Association of Personnel Services (NAPS) Conference.

As many of you know, Top Echelon officials (including myself) will be in attendance at the NAPS Conference.  Since I can’t—as of yet—be in two places at the same time, there will be NO Virtual Core Group teleconference call meetings during the second week of the month.

However, outside of that “bump,” there aren’t any other changes to the Virtual Core Group schedule for the month of September.

In fact, below is the VCG teleconference call schedule for September (all times listed are Eastern Standard Time):

Then I expect you to attend a Virtual Core Group teleconference call meeting!  (Needy, aren’t I?)

At Top Echelon Network, we’re always looking for the next location for our National Convention.  We’ve been to some great places down through the years—a variety of cities located all throughout the United States.

We recently conducted a survey of Network recruiters, and that survey was based upon the following question:

Which of the following locations would be best for a Top Echelon Network National Convention?

It was definitely a close race, but Las Vegas beat New Orleans by a margin of 34.6% to 29.5%.  Top Echelon Network has held a National Convention at both locations in the past, and both events were highly successful.  However, the current Membership currently craves a return trip to Las Vegas.

Baltimore was third at 16.7%, followed by Atlanta at 10.3% and Denver and 9.0%.  Top Echelon has never held a National Convention in any of those cities, although the Network has had a regional event in Baltimore before.

Clearly, the results of this Network survey show that Top Echelon recruiters wish to attend a National Convention at a venue with plenty of entertainment options.

Where do YOU think we should go for a National Convention?  One of the destinations listed above . . . or some place that we didn’t even mention?

Success in Top Echelon Network is predicated upon a great many things, not the least of which is Active Participation, one of the Four Pillars of the Network.

We recently conducted a survey of our Network recruiters, and that survey was based upon the following question:

Have you ever attended a Top Echelon Network Regional or Virtual Core Group meeting?

If that was truly representative of the Network overall, it would bode quite well for the state of networking within Top Echelon.  However, since the recruiters most likely to attend a Virtual or Regional Core Group meeting are also the most likely to participate in a Network survey, extrapolating these results might make for a slightly skewed conclusion.

How about YOU?  Have you attended a Regional or Virtual Core Group meeting as a Top Echelon Network recruiter?  If not, do you plan to attend one or the other in the near future?

Robert Briones, CPC has made 32 placements as a Top Echelon Network recruiter.  His firm, R.A. Briones & Company, has been a Preferred Member since 1997.

Larry Gallin has made 45 placements as a Top Echelon Network recruiter.  His firm, Gallin Associates, has been a Preferred Member since 2003.

Michael Stuck has made 24 placements as a Top Echelon Network recruiter.  His firm, Gables Search Group, has been a Preferred Member since 2004.

Sean Napoles, CPC has made 183 placements as a Top Echelon Network recruiter.  His firm, Career Brokers, has been a Preferred Member since 2000.

“This is another testament to the basic communication one can have.  I began to talk to Larry about golf courses to play in St. Pete.  He mentioned one of his positions in Mexico and asked me for candidates.  I had a similar position elsewhere.  The candidate I sent him has final interviews at corporate today.  His candidate for my job got his offer yesterday.  We may have reciprocal placements within a few days!”

Submitted by Robert Briones, CPC of R.A. Briones & Company regarding his Network split placement with Larry Gallin of Gallin Associates

(Editor’s note: This is the first Network split that Briones and Gallin have made together in Top Echelon.)

“It’s been way too long for Sean and I to go between split placements.  We finally got another one and have a couple more offers pending.  Sean is the ultimate pro.  As usual, the candidate was spot-on, and my clients always interview all of Sean’s candidates.  Thanks again, let’s make a few more now.”

(Editor’s note: This is the ninth Network split that Stuck and Napoles have made together in Top Echelon.)

The 2013 Top Echelon Network Ohio Golf Outing is less than two weeks away!  So this is the last time I’ll be able to remind you about it in The Pinnacle Newsletter Blog!

DETAILS : Below are some additional details about the outing.

We know for a fact that not every Top Echelon Network recruiter believes that there is value in attending our conferences and conventions.  How do we know that?

Because not every Top Echelon Network recruiter attends our conferences and conventions.

But you know who DOES attend?  Those recruiters who realize the true value of these events, namely the opportunity to meet new Network recruiters and make placements they probably would not have made otherwise.

“I have made numerous splits with Automationtechies.com, but this is the first one with Lisa.  We met at the Chicago conference last fall, and this is the result of that!  Thanks, Lisa!  Let’s do more splits!”

Submitted by Alan Daum of Alan N. Daum & Associates, Inc. regarding his split placement with Lisa Reitz of Automationtechies.com

(Editor’s note: This is the first Network split that Daum and Reitz have made together in Top Echelon.)

“Thanks, Bobby!  Can’t wait to see you in Chicago in the fall!”

(Editor’s note: This is the first Network split that DeBorde and Gabor have made together in Top Echelon.)

But more importantly, there will be the value of meeting other Network recruiters face-to-face, networking with them, and making split placements when you get back to the office.

Okay, that’s a stretch, but work with me here.

The 2013 Top Echelon Network Ohio Golf Outing is scheduled for Tuesday, July 23, at Bunker Hill Golf Course.  This outing will be a scramble-style event.  That way, everyone—regardless of skill level—can play and have a great time.

More importantly, though, we want you to create a great Top Echelon networking memory.  If that memory involves sinking a 40-foot putt, so be it.  Below are some additional details about the outing:

To register for the 2013 Top Echelon Network Ohio Golf Outing, email me!  When you do, mention if you are an “A” player or a “B” player.  What’s the difference?

However, regardless of your skill level, I encourage you to attend this event.  As always, there will be plenty of food, fun, and networking!

These days, you can’t get people’s attention unless you have a list . . . so I made up a list of three great reasons you should attend the 2013 Top Echelon Network National Convention.

Are there more than three reasons?  Sure there are.  But in the interest of brevity, I’m only presenting that many.

Reason #1—Danny Cahill!  He’s going to be the main speaker for the convention.  It’s been quite a few years since Danny presented for us at a Top Echelon Network event, and we’re certainly glad he’ll be in St. Petersburg for the convention.  In fact, I know there are some recruiters who are going to sign up for the event JUST because he’s speaking.  Danny is wealth of recruiting information, and you have a chance to tap into that information at the convention.

Reason #2—You’ll have the chance to find new split placement Trading Partners.  This opportunity is huge draw for split-minded recruiters.  They love networking with other recruiters and meeting them face-to-face, sharing hot job orders and candidates, and setting themselves up for making more splits in the future.  It never fails: placements result from each and every event that we hold, and this one will be no exception.  I’ll be sure to publish details of those placements following the convention.

There’s my list.  Just three items, but they are three great reasons to register for the convention and to do it sooner rather than later.

So register for the 2013 National Convention!

This is it!  Early Bird Registration for the 2013 Top Echelon Network National Convention is finally here!

As has traditionally been the case, we release Early Bird registration in December so that recruiters can sign up for the convention before the end of the year.  That way, they can apply the cost of the event toward the current year’s business expenses.

Something else that’s also been a tradition is that we keep the cost of convention registration as low as possible.  Prices may rise everywhere else in the world, but we keep the price of attending Top Echelon Network events pretty much the same.

Case in point: Early Bird Registration for the 2013 National Convention, scheduled for April 25 through April 27, is just $495 per person.  Compared to the cost of attending other conferences and conventions within the recruiting industry, that’s a rather reasonable price.

Remember, our goal is NOT to make money off the convention.  We consider the convention an investment in the Network.  We believe that getting recruiters together will help them grow their business, and part of that growth will include more split placements.

Why do we believe that?  Because we’ve seen the proof during these past 25 years.  That’s right, we’ll be celebrating our 25th anniversary next year, so that’s yet another reason to attend the convention.

Want another reason?  Danny Cahill of AccordingtoDanny.com is the main speaker for the National Convention!

Want another reason?  The site of the convention is the TradeWinds Resort in St. Petersburg, Fla., the site of our very first convention way back in 1990.  It’s a great venue with a great speaker for what’s going to be a great event.  The only thing missing is . . . YOU!

So register for the 2013 National Convention! 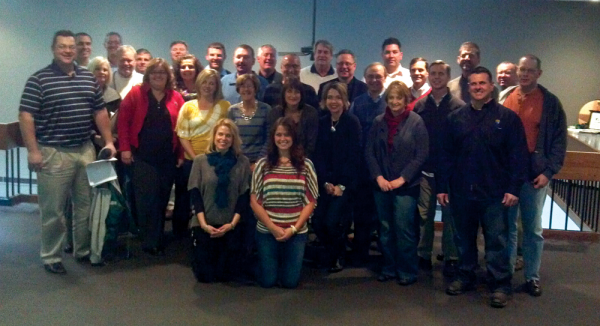 And look, it’s been proven again!

A total of 30 recruiters convened on Wednesday, November 28, at the Catering by Design Center in Columbus for the annual meeting of the Ohio Regional Core Group.  These recruiters networked, traded hot job orders and candidates, and generally picked each other’s brains about their industries, the job market, and recruiting in general.

So what does this mean?  Among other things, it means that not only will these recruiters make more split placements, but they’ll also make more placements overall, now that they’ve used this networking opportunity to sharpen their skills, streamline their process, and overcome obstacles on their desk.

If you’d like to join an existing Regional Core Group in Top Echelon Network (or start a new one), contact Membership Development Coordinator Drea Codispoti, CPC/CERS at (330) 455-1433, Ext. 156.

And don’t forget to send us photos of your next Regional Core Group meeting, wherever that may be, so we can share them with the rest of the Membership . . . and on Facebook, too.  Of course.