A couple of weeks ago, I announced that the next meeting of the Central Ohio Regional Core Group was scheduled for Wednesday, December 11.

I’m back to announce that there’s been a change, specifically that the meeting has been moved up by one week, to Wednesday, December 4.

Please note that all other details regarding the meeting are the same.  I’ve listed those details below for quick reference.

During Regional Core Group meetings, Top Echelon recruiters have the opportunity to network with each other on a face-to-face basis (the best type of networking), as well as trade hot job orders and candidates and share strategies for increasing productivity.

The details regarding the next meeting of the Central Ohio Regional Core Group are as follows:

Speaker: TBD (an announcement will be made once the agenda is released)

Cost: $25 per person, payable at the door OR we can add it to your Top Echelon invoice

If you’d like to attend the upcoming meeting of the Central Ohio Regional Core Group, please RSVP to me by sending an email to drea@topechelon.com.

I also encourage you to contact me at 330.455.1433, x156 if you’d like to join another existing Regional Core Group or if you’re thinking about starting a new one.

Speaking of the former, the Central Ohio Regional Core Group has been one of the most successful Regional Core Groups in the 25-year history of Top Echelon Network.  (They have the split placements to back it up, that’s for sure.)

This is a group that gets together and meets face-to-face each and every year, without fail, and the recruiters that comprise this group are doing it again!  That’s right, the Central Ohio Regional Core Group has scheduled its next meeting.

The specifics of that meeting are listed below:

Speaker: TBD (an announcement will be made once the agenda is released)

Cost: $25 per person, payable at the door OR we can add it to your Top Echelon invoice

During Regional Core Group meetings, Top Echelon recruiters have the opportunity to network with each other on a face-to-face basis (the best type of networking!), as well as trade hot job orders and candidates and share strategies for increasing productivity.

I’m very pleased to announce that the Midwest Regional Core Group has a date and a venue for its next meeting!

While that date isn’t exactly right around the corner, I encourage those recruiters who can attend to take this opportunity to work the date into their appointment books.

The next meeting of the Midwest Regional Core Group is scheduled for Friday, January 31, at the Ramada in Topeka, Kansas.  Not only is there a date, but there’s also a tentative itinerary, which is tentatively listed below:

1 to 1:30 p.m.—Breakout groups for exchanging hot job orders and candidates

The tentative cost to attend the event is $50.  That price includes lunch, snacks, beverages, and the training.

Attending a Regional Core Group meeting is a great way to leverage the resources available in the Network and increase the value of your Membership!

Success in Top Echelon Network is predicated upon a great many things, not the least of which is Active Participation, one of the Four Pillars of the Network.

We recently conducted a survey of our Network recruiters, and that survey was based upon the following question:

Have you ever attended a Top Echelon Network Regional or Virtual Core Group meeting?

If that was truly representative of the Network overall, it would bode quite well for the state of networking within Top Echelon.  However, since the recruiters most likely to attend a Virtual or Regional Core Group meeting are also the most likely to participate in a Network survey, extrapolating these results might make for a slightly skewed conclusion.

How about YOU?  Have you attended a Regional or Virtual Core Group meeting as a Top Echelon Network recruiter?  If not, do you plan to attend one or the other in the near future?

And we have even more proof in this week’s issue of The Pinnacle Newsletter Blog.  Why is that?  Because the placements in the network of job placement recruiters are still happening!  In fact, you can’t stop them from happening (not that we’d actually want to do that . . . that’s crazy talk).

As for the present?  They’re making placements as part of the split fee recruiting network!  (I thought we established that.)

If you would like to participate in one of these Core Groups, contact Top Echelon Network Membership Development Coordinator Drea Codispoti, CPC/CERS at (330) 455-1433, Ext. 156.  If you’d like to create your own Core Group or find out more about them, contact Drea for that, too.

If you’d like to compliment one of your Trading Partners for a recent split placement, you can contact ME by sending your comments to Marketing@TopEchelon.com.  Those comments will appear in a future issue of The Pinnacle Newsletter Blog!

“Thank you, Lee, for quickly jumping on this one when I emailed you for assistance.  As is often the case with candidates, a little extra TLC was involved, but it was well worth it!  I’m looking forward to our next one!  The Ohio Golf Group strikes again!”

(Editor’s note: This is the second split placement that Stitt and Fierman have made together in Top Echelon Network.)

“Joe searched Monster.com after attending the Central Ohio Core Group meeting.  Thanks, Joe, for taking the initiative and searching and sending me this candidate.”

(Editor’s note: This is the first split placement that Daum and Cotter have made together in Top Echelon Network.)

Why are they meeting?  Because the members of the group find value in these meetings, including making split placements together . . . which is why YOU should consider joining a Regional Core Group, too.  (If you haven’t already, that is.  I’ll cut you some slack then.)

Below are the specifics for the next Central Ohio Regional Core Group meeting.

Speaker: TBD (an announcement will be made once a speaker is selected)

Cost: $18 per person, payable at the door

I strongly encourage you . . . 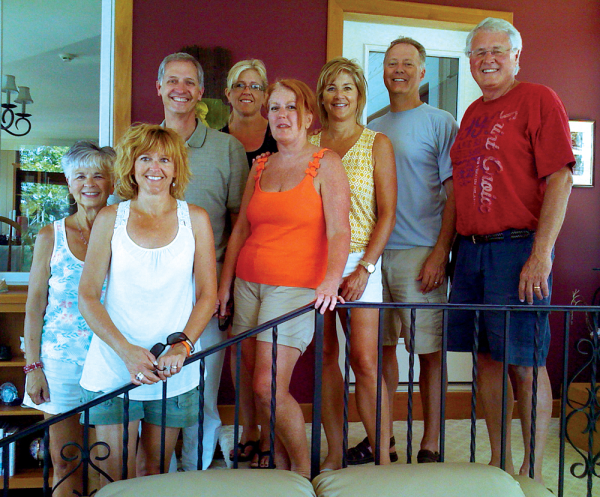 If you have a Regional Core Group meeting upcoming, or you plan to meet with another Preferred Member recruiter, be sure to send us a photo!  You can send your photo to marketing@topechelon.com.

How in the world is it already June?  I have no idea.  The year is flying by.

What I do know, though, is the date of this year’s Top Echelon Recruitment Network Ohio Golf Outing.  That date: Thursday, July 19.

This outing has been held for the better part of a decade now, and the benefits of attending this event have been proven time after time after time.  Recruiters have golfed together, networked together, and made split placements together—that’s the perfect blueprint for success.

With that in mind, I’d like to take a moment to thank Preferred Member recruiter Debra L. Stitt, CPC of Quality Source Inc. of Ohio for all the work she’s put into this event over the years.  She helped to build the outing into what it is today, and we’re truly grateful for her efforts.

Below are the specifics regarding this year’s outing.

Note that food is NOT included in the cost of the outing.  If you desire sustenance, you can always run up to Bunker’s Grill and order something off their menu.

Let’s network, share job orders, take a break from our busy desks, and have some fun together . . . before this year passes us by.

There are many different ways that you can make split placements in Top Echelon Network!

Many of them are covered in this week’s installment of Completed Placements.  However, there’s one that’s not covered, and I’d like to do that now.

That way is through participation in Regional Core Group meetings.

However, before we get to how YOU can benefit from participating in these groups, I’d like to present the most recent placement resulting from a Regional Core Group meeting.

“The NE Ohio Core Group puts up another one!  Linda provided the perfect candidate for my job.  We communicate regularly and openly share our jobs.  That is why this placement happened.  Thank you, Linda!”

(Editor’s note: this is the second split placement that Sgro and Gutekunst have made together in Top Echelon Network.)

Check Out the Facebook Photo Albums of These Regional Core Groups

Here at Top Echelon Network, we are ALL about networking, and that includes both traditional networking and social networking.

That’s why we’re doing our best to meld the best of both worlds.

Regional Core Groups within the Network have started to heat up again in recent months.  This is not too surprising, since economic conditions in the country seem to be getting better and companies appear more interested in hiring again. (In fact, the economy added over 200,000 jobs during the month of February.)

At one time, we had anywhere from six to eight Regional Core Groups operating within the Network.  While we don’t have that many groups at the moment, they’re making a comeback.  In other words, the recruiters in these Core Groups are meeting, and they’re making plans to meet again in the future.

With that in mind, we plan to create individual photo albums on the Top Echelon Network Facebook Fan Page dedicated to each of the Regional Core Groups within the Network.  That way, every time the group holds an event, we can post pictures of that event in the album for all to see.

This group was once known only as the Maryland Regional Core Group before expanding its territory slightly.  What hasn’t changed, though, is the fact that the group holds a special after-holiday party every year, complete with annual awards.  The latest after-holiday party for this Core Group also took place last month.

Which brings me to my next point . . . please send us photos of your Regional Core Group events.  We can’t post photos of events that we don’t have.  So snap some pictures and send them our way, and if you’re interested in joining an existing Regional Core Group—or starting a new one—be sure to contact me.

Oh, and if you’re Facebook Friends with any of the recruiters in these photos . . . be sure to tag them for me, would you?  Thanks.