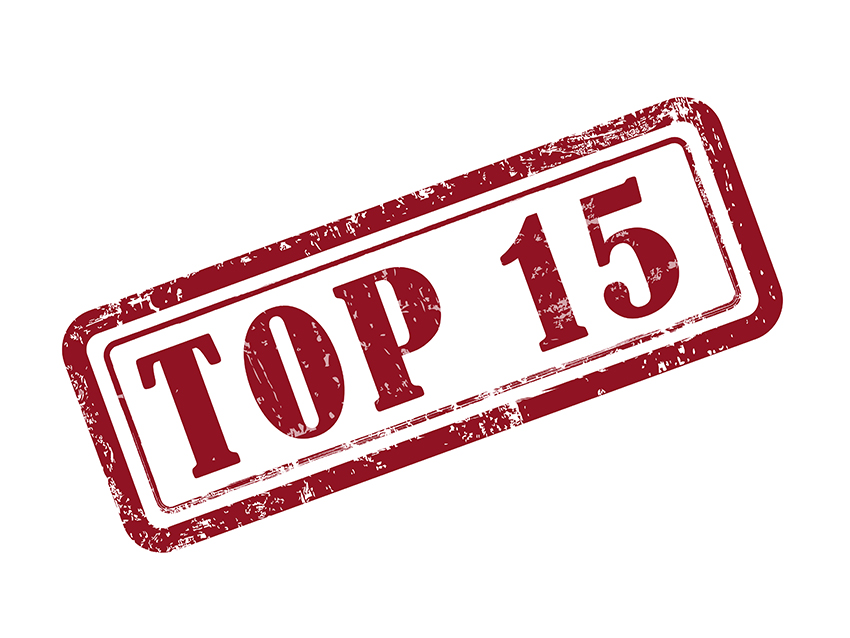 A lot of exciting and cool things have happened in the Network during the past 12 months. While there are too many to count, we are going to count down the top 15 moments in Top Echelon Network for 2015.

Keep in mind that these are moments, NOT milestones. We’ll be counting down milestones in a separate blog post. So, without further adieu, below are the top 15 moments in Top Echelon Network for the soon-to-be completed year of 2015:

Well, you can’t have a “Top 15” list like this unless you actually exist, and Top Echelon celebrated its 27th anniversary in spring of this year. The official birthdate of TE is March 8, 1988, when it was known as Nationwide Interchange Service. That was the day that the first Pinnacle newsletter was mailed by company founder Mike Kappel.

Click here for “27 Little-Known Facts About Top Echelon on Its 27th Anniversary.”

Top Echelon President Mark Demaree will soon celebrate his 17th anniversary with the company. That means he was 33 when he joined TE. That also means that he’s 50 years old. That also means he’ll turn 51 next year, but don’t tell anybody that his birthday falls on Valentine’s Day. Oops.

A couple of years ago, Top Echelon moved its headquarters from downtown Canton to the Belden Village area of the municipality. Since then, we’ve had numerous Network members visit us at our new digs. This past year, those members include Maria Hemminger and Joanna Spaun of MJ Recruiters, LLC; Trey Cameron of the Cameron Craig Group; Bob Gabor of The Gabor Group; Matt O’Mara and Laura Freund of Cranbook Search Consultants; Jim Folger, CPC of One Source Technical, Inc.; and Jim Fitzpatrick of Fitzpatrick & Associates.

Top Echelon held a fun company event this past fall in front of TE headquarters. As part of that event, employees were able to don inflatable sumo suits and wrestle each other. So of course, Top Echelon President Mark Demaree and Director of Network Operations Drea Codispoti, CPC/CERS squared off. Mark was a wrestler in high school. Drea played soccer.

See what happened during this epic battle.

For the first time in company history, the Top Echelon sales team made 100 product demonstrations or more to prospects every month for a whole year. To help celebrate this achievement each month, we bought a commemorative cake and ate it with great fanfare. The sales team has even bigger goals for 2016, which means, of course, bigger cakes.

We launched a new version of the MEGA Database search tool earlier this year and have continued to refine and improve it since then. The MEGA Database is designed to help Network members find the candidates they need more quickly and with more accuracy. If you haven’t started using this tool, we encourage you to do so. The MEGA represents the future of the Network, and we need your feedback and insight to make it as robust as possible.

This annual event in the Windy City of Chicago was good as it’s ever been, with a healthy number of new Network members and popular industry trainer Barb Bruno, CPC/CTS of Good as Gold Training in attendance. There were plenty of memorable moments, from attendees blowing off steam by heading downtown for a night of revelry or by hitting the bowling lanes with unabashed enthusiasm. Trading partner relationships were forged, friendships were made, and placements will result.

Click here to see photos from the Fall Conference.

This year marked the first time that we held a National Convention in the city of Atlanta. Once again, there were a ton of newer members, plus plenty of opportunities for networking and training. Not only that, but the World of Coca-Cola museum and Georgia Aquarium were nearby, there were plenty of other things to do and see in the city, and Network recruiters continued forging friendships and relationships that will last for years to come.

Click here to see photos from the National Convention.

Top Echelon launched not only a new website, but also a new branding initiative. Both were effective on September 1. As a result of the initiative, Top Echelon Network and Top Echelon Contracting are now together under the Top Echelon brand, which means they share the same website and have joined forces to provide the best tools and services possible to third-party recruiting agencies across the United States and Canada. It’s the next step in world domination! (We’re just kidding . . . or are we?)

Trey is setting records in Top Echelon Network that will never be broken. Recruiter of the Year for four straight years, overall 300 career placements (now close to 400), and over $2 million career cash-in (now close to $3 million). However, the accomplishment that’s most impressive is his 105 Network split placements in a 12-month span. Trey isn’t just re-writing the Top Echelon record books, he’s setting a new standard for Network achievement. That deserves a place on this list.

#5—”All in the Family” member stories

Membership in Top Echelon Network has always been a family affair. That was the case again this past year, specifically with Colleen and Matthew Switala, the Kohns (Steve, Rebecca, Hannah, and Sara), and the Copelands (Steve and Pam). We’re talking about hundreds of split placements and well over $2 million cash-in. We love stories like these because we enjoy providing so much value to our customers that they feel compelled to share that value with their family. That’s when you know that you’re doing something right.

The Top Echelon Golf Outing has become an annual event, in one form or another, for nearly 10 years. It’s changed dates, it’s changed locations, it’s changed format, but one thing that has remained constant is that Network recruiters show up, whether they’re good golfers or not. They’re not there to look like a PGA or LPGA pro. They show up to network with other recruiters, share war stories from the front lines of recruiting, and to help and support one another. Oh, yeah . . . and they end up making some placements, too.

Click here for “3 Reasons the Top Echelon Golf Outing Was a Success.”

As impressive as the Top Echelon Golf Outing is, the annual “Networking on the FARM!” event is even more impressive. This event is hosted by Hemminger and Spaun in Tiffin, Ohio, and it includes a TON of fun activities. Those activites include swimming, volleyball, cornhole (you read that correctly), fishing, and kayaking. And it wasn’t just recruiters from Ohio that attended. Members came from as far away as Michigan, South Carolina, and North Carolina to attend. Clearly, “Networking on the FARM!” has got it going on.

Click here for photos of this year’s “Networking on the FARM!” event.

#2—Emergence of the “split placement selfie”

What do you get when you combine wild and crazy Top Echelon Network recruiters like Hemminger and Dave Sgro, CPC of True North Consultants with a technologically-driven pop culture phenomenon? You get a “split placement selfie,” that’s what! This dynamic duo coined the phrase, took the photos, and blazed a trail of excitement based on large placement checks, effective recruiter branding, and a whole lot of fun. They took the lead, and other recruiters followed suit. Here’s to many more “split placement selfies” in 2016!

#1—The largest split placement in the history of TE

As I mentioned in #15 on this list, Top Echelon Network is now 27 years old. In those 27 years, we’ve never had a split placement fee as large as the onle made by Mary Anne Buckley, CPC of Insterstate Recruiters Corp and Richard Connors of Vista Technology this past year. The amount of that placement fee: $78,750! This fee eclipsed the next-highest fee in the history of the Network by more than $10,000. They didn’t just break the record. They shattered it.

So congratulations to Mary Anne, Richard, and everybody else who enjoyed a great year in 2015. We’re looking forward to more great moments in 2016.