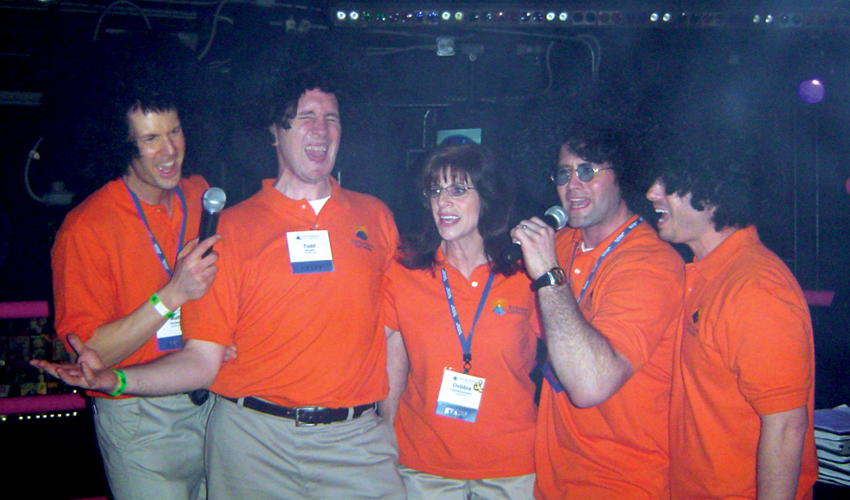 Regular Registration for the 2016 National Convention is now over, but you can still sign up! (Although it IS the Late Registration period now. So shame on you.)

Sounds pretty ominous, doesn’t it? Well, then let me lighten the mood with fun list that includes all of my favorite memories from Top Echelon conventions past!

To set the stage, Top Echelon has traditionally held two big events for its Network members: a National Convention in the spring and a Fall Conference in . . . well, the fall. (We’re nothing if not logical.) For the purposes of this blog post, namely because of next month’s event, I’m only going to focus on the convention.

Below are my top seven National Convention memories in Top Echelon (in no particular order other than chronological):

This was my very first National Convention (I joined TE in 2003). Like this year’s convention, it was also held in Las Vegas, and what a convention it was. This was the second time we held a scavenger hunt of this nature, and I understand it, the first one had to be experienced to be believed. This one was quite entertaining, as well. I especially enjoyed when Todd Bossler tried to convince the passengers of every limousine arriving at the Bahama Breeze that they were the first ones there . . . even when they were last. The good news is that nobody was arrested. At least not that we’re aware of.

The Wild Horse Saloon is a famous part of the night life in Nashville, Tenn., the site of the 2005 National Convention. The main part of the convention was held in the Gaylord Opryland Resort, which is the size of a small city. Basically, it’s a small city combined with a mall. It’s a mall-city. Anyway, we headed off-site to the Wild Horse for a night of food, fun, and dancing . . . line dancing, specifically. Top memories: hitting my head on a low-hanging television set (how short are people in Tennessee?), somehow knowing all of the lyrics to “Save a Horse (Ride a Cowboy),” and watching a Network recruiter literally chase our bus down the street when it was time to leave.

Our 2006 National Convention was held at the Disney World resort in Orlando. The Gala Event involved dinner at a retro establishment by the name of “8 TRAXX.” And how could we possibly hold such an event without some karaoke? One of the reasons I’m especially fond of this convention is it was the last one I attended with my good friend Toby Thomas, who left Top Echelon to become a pastor. (He’s pictured in the wig-wearing photo above). Top memories: karaoke selections by Network recruiters that included “Super Freak’ by Rick James and “Big Balls” by AC/DC. Drinks were drunk, wigs were passed, fun was had.

This convention was held at the height of economic growth and hiring activity in the country. In other words, it was right before the Great Recession started. So we celebrated the good times by taking Network recruiters to Charlotte Motor Speedway. As part of that trip, those recruiters had the opportunity to participate in the Richard Petty Driving Experience. That’s right, you got to ride in a NASCAR vehicle around the oval at speeds approaching 200 miles per hour. What I remember most? The feeling of my spine actually pressing against the back of my body and pinning me to the passenger seat.

For our 2008 National Convention, we headed to Texas, specifically Dallas. The recession didn’t start until later that year, so the good times continued to roll. As a result, the convention included a stop at Billy Bob’s Texas, the World’s Largest Honky Tonk. (I’m inclined to take their word for it.) Not only was there mechanical bull riding, but there was also a TE Texas Hold ‘Em Tournament and an area where you could watch REAL bull riding. Top memories: Todd Bossler wearing his giant foam Texas Rangers hat, a game recruiters played during the Icebreaker Reception upon which I’d rather not elaborate, and two female school teachers begging me to allow them to ride on the mechanical bull. (Without signing a waiver? Are you kidding? Kappel would kill me!)

The Great Recession threw everybody a curveball, to say the least, and that was certainly the case with our conferences and conventions. In 2010, we briefly went to a different format, holding six “mini conferences” throughout the country. But we already had our hotel booked for 2009, and you really don’t want to break your contract with a hotel. As you might guess, attendance for this event was lower than in previous years. Recruiters were beat up. They had cut staff. They had cut expectations. They needed to blow off some steam, and that’s exactly what they did. Everybody enjoyed a buffet dinner on the beach in South Carolina in what could only be described as brisk temperatures. But it did not matter. Once night fell and the tunes were spinning, just about everybody hit the dance floor and shook out their frustrations about the present and anxieties about the future.

We went back to Charlotte seven years later. Sadly, this time we were not able to offer the Richard Petty Driving Experience. However, we once again allowed the recruiters to race against each other in high-powered go-karts, and it was just as big of a hit as it was the first time. In fact, there were quite a few “dust-ups” and close calls on the track (including one that involved our keynote speaker for the convention). As a bonus, this time yours truly was able to drive a go-kart, as well. That’s because when Drea Codispoti and I went to the track early to make sure everything was set up, they asked if we would like to test out the karts. Of course, we could hardly turn down their polite request. But please—don’t tell any of the other TE employees. They weren’t able to do that.

Don’t feel bad for them, though, because they’re going to Las Vegas for this convention and I am not. But that’s okay. I am a grizzled veteran of these events, and as you can see, I have fond memories of them.

So now it’s time for you to attend and make fond National Convention memories of your own. Register today and go to Vegas!

To sign up for the convention with a credit card, login to the Members’ Area. Then locate the convention registration links on the left-hand side of the page. Click on the appropriate links and follow the instructions to submit the correct information.

If you have any questions about the National Convention, please contact go-kart racing Drea at 330.455.1433, x156 or via email at drea@topechelon.com.