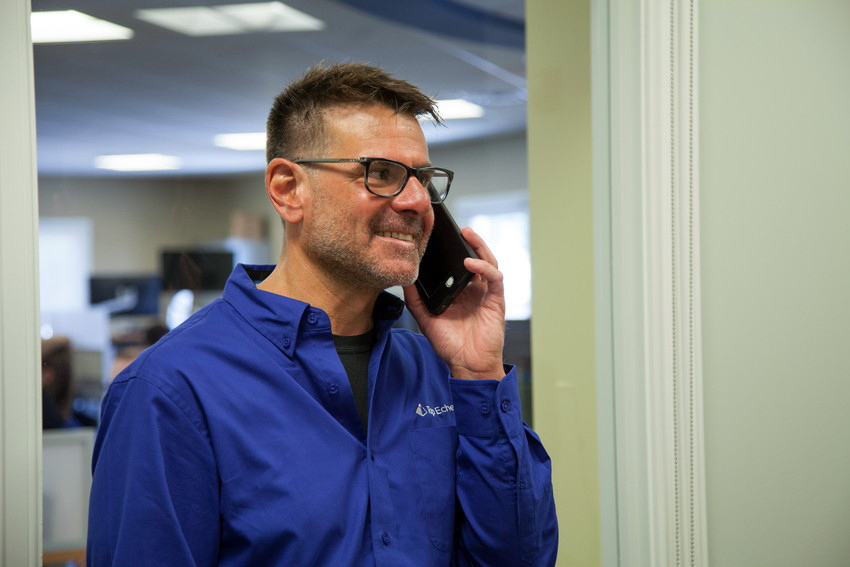 Well, this was a foregone conclusion. What was? The fact that another recruiter was going to reach the 100-placement plateau in Top Echelon Network. AND the fact that the recruiter in question is David M. Sgro, CPC of True North Consultants, Inc.

And this time, we’re NOT going to publish the blog post with a stock photo of somebody who isn’t even a recruiter. As you can see, we’ve published the article with a photo of the REAL Dave Sgro posing as if he’s actually in a stock photo. (Because in the world of recruiting, you just can’t take yourself too seriously.)

What we are serious about, though, is recognizing Dave for his many accomplishments in the Network. In addition to his high production, below are five more reasons why he is Recruiter of the Week:

What does this mean? It means that Dave does NOT view split placements as a last resort. He views them as a first option IF it means filling the job order quickly with the best candidate available. After all, that’s what his clients want to do: fill the position with the best candidate as soon as possible. They don’t care if he keeps the full fee or has to split it. Consequently, Dave doesn’t care, either, and that’s why his clients love him.

#2—He makes (a lot) of contract placements.

Dave does whatever it takes to provide value to his clients. If that means getting the candidate from another recruiter and splitting the fee, that’s what he does. If that means taking a contract job order and filling it with the help of Top Echelon Contracting, that’s what he does. He’s open to the benefits of offering contract staffing to his clients, and he’s reaped those benefits. To date, he’s made 75 contract placements through TEC. So that means he could become the first recruiter to make both 100 direct hire and 100 contract placements through TE. Go, Dave, go!

#4—He excels at networking.

Dave is proactive in his networking efforts. Not only does he attend the National Convention and the Fall Conference, but he attends Regional Core Group meetings, as well. He never misses a chance to meet another TE recruiter face-to-face. Effective networking is the backbone of Top Echelon Network. Dave provides an excellent example of how it leads to a flourishing split business. AND he’s a co-inventor of the “split placement selfie.” So there’s that.

#5—He values (and praises) his trading partners.

Of the 100 placements that Dave has made, he’s probably praised his trading partners for every single one of them. Okay, that might be an exaggeration. How about the majority of them. Just like the comments below, Dave appreciates his trading partners and voices that appreciation. That’s how you build relationships with other recruiters and motivate them to work with you again. And make more split placements. And then make still more split placements.

So congratulations to David M. Sgro from everybody here at Top Echelon! We’d like to thank him for his hard work, and of course, for the fact that he’s so photogenic!

“Philip nailed it for me! He sent me two great local candidates, the only two candidates my client really considered. Thanks, Philip! Let’s do more!”

(Editor’s note: This is the second Network split placement that David M. Sgro and Philip Bartfield have made together in Top Echelon.)